Dame Annabelle Rankin was indeed a busy woman. She was the second female senator in Australia and Australia’s first female ambassador. She was descibed as active, vigorous, strong willed, tireless and uncompromising. She is the namesake for  the latest 24m Incat Crowther designed ferry from RDM. Perhaps some comparisons can be found as this hard working ferry busies herself around Sydney Harbour, darting from wharf to wharf, carrying commuters and tourists to and from most corners of Australia’s busiest waterway. Like her two previous sisters, she can carry 198 passengers and cruises at an economical 22 knots.

Want to make an enquiry? Fill out this form and we'll get back to you very soon! 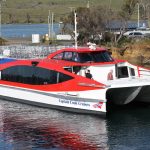